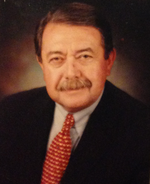 He was born in Cartagena, Colombia, August 21, 1937 to Benjamin Sandoval and Laura Gil. He attended high school at Colegio San Bartolomé in Bogotá, Colombia and graduated from Universidad Nacional de Colombia. He was married to Soledad (“Solita”) Bahamón on May 11, 1963.

Benjamin had an intellectual mind, loving heart and generous disposition. He enjoyed the finer things in life but none more than being a devoted husband, father, grandfather, sibling and friend. His career spanned five decades as a civil engineer and project executive with Raymond International, Morrison-Knudsen and management consultant in multiple locations throughout the Americas and the Caribbean.

Please leave a message of condolence on the memorial wall at https://www.asacredchoice.com/memorials/Benjamin-Gil/4227172/index.php