To share your memory on the wall of Charles Theodore \"Ted\" Boswell, sign in using one of the following options:

Ted was born in Carbondale, IL and grew up in Jackson, MS. He graduated from Forest Hill High School, Hinds Junior College, and Mississippi College. After serving in the US Air Force as a 1st Lieutenant and attending graduate school at Georgia State University, Ted began his career as an actuary. He retired in 2013 from his position as CEO of Western Reserve Life Assurance Company in St. Petersburg, FL.

Ted enjoyed travel and had visited 44 countries. He read every sci-fi book in his public library as a boy. He carried his love for science fiction with him his entire life by watching every episode of Star Trek, believed in quantum theory as well as time travel, and enjoyed going to see the Star Wars movies with his sons and grandkids. He was a mathematician who became an actuary. Predicting risk was his specialty and earned him the title of “President of the Safety Council” among his family members. He constantly could be heard telling young ones “don’t do that” or “that’s not safe.” He loved soccer, golf and baseball and featured as a catcher in his youth. That passion for sports lived on through his children and grandchildren. Pop loved to watch them participate in sports and was an avid supporter of his family members as they played, even offering advice to them throughout the game with his booming voice. He was the king of the first impression and loved his long weekend drives around town early in the morning. He described himself as a problem solver which was highlighted by his great listening ability and helped him become an executive in his business life. He gave great advice, believed in a positive attitude everyday, and put his family before everything else. Finally, Pop was known by those closest to him for his ability to sleep anywhere comfortably. This included airplanes, couches, and the monthly performing arts plays he attended with his wife. He credits this skill to his time as a missile officer in the Air Force where he slept in missile silos, and we take joy in knowing that all of that preparation allows him to Rest In Peace for all of eternity.

Ted was loved and respected by all who knew him. He always put the interests of others ahead of his own. He was a wonderful husband and a great role model for his sons and grandchildren. The world has lost a truly good man and he will be greatly missed.

The family will host a celebration of his life in Tampa, FL once it is safe to do so. In lieu of flowers, please feel free to make a donation to the charity of your choice.

For details and to leave a message for the family, please visit www.asacredchoice.com.
Read Less

There are no events scheduled. You can still show your support by sending flowers directly to the family, or planting a memorial tree in memory of Charles Theodore "Ted" Boswell.
Plant a Tree

We encourage you to share your most beloved memories of Charles Theodore "Ted" Boswell here, so that the family and other loved ones can always see it. You can upload cherished photographs, or share your favorite stories, and can even comment on those shared by others.

Posted Jul 24, 2020 at 11:04am
I am very sorry to hear of the passing of Ted Boswell. Although I didn't know him very well, I used to work with him in the St Petersburg WRL work location. He always had a smile. I have been in the same elevator many times , and I always said hi to him, and he would always smile and respond back..Nice guy..will be missed .
Comment Share
Share via:
TK

Posted May 10, 2020 at 07:52pm
Pop...May the winds of heaven blow softly and whisper in your ear, how much we love and miss you and wish that you were here. With all our love, TGR

Thank you, Taylor and family. I love it that a tree will grow in his memory. ❤️

Posted Apr 28, 2020 at 07:04pm
I preferred "Mr. Boswell" when speaking with him. It was my old school affection for him. Incredibly kind to me always, and perpetually up for a good conversation, he and the family will roll into DC to visit and watch Bobby play for DC United. I will always remember sharing a seat at the stadium and a spot on my backyard grill. Those are memories I will cherish forever.

Hello Dan. You ARE family and always will be. Those early days with DC United were so much fun and very exciting. The kindness clearly went in both directions. Your heartfelt comments are much appreciated.
JW

It was my absolute pleasure to know and work with Ted. Some of my fondest memories are of Ted's unique wit and insights. My thoughts and prayers to Susan and family.
Comment Share
Share via:
S

Thank you, John. I hope you and your family are well.
L

Posted Apr 14, 2020 at 07:47am
I knew him for a period of time about 45 years ago. Still, when I picture him, he has his head and shoulders hunched over reading a book. Another memory equally as impressed upon me as the first, is my watching Ted, hunched over again. This time, he was hunched over his infant son. He was anxious to know "How do you change his diaper!" Ted wanted to do not only the changing but also everother aspect of caring for his newborn son. It seemed as if he thought noone else could do it right. Yes, that was HIS son. He absolutely adored Chad, his firstborn and namesake. Still to this day, I never have seen such devotion and attentiveness by a father to his baby. What a Daddy!

Thank you Linda. He was a wonderful father to his sons, and so proud of them and the grandchildren.. 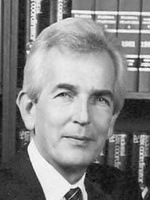 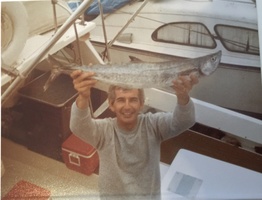 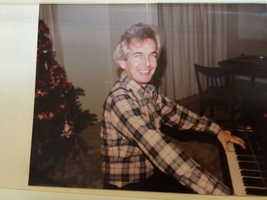 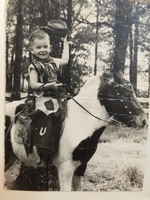