To share your memory on the wall of Crawford Rice, sign in using one of the following options:

Crawford married his high school sweetheart, Lydia Putnam Rice, on September 9, 1949 at the First Methodist Church in Selma. In 1951, He graduated from the University of Alabama with a Bachelor of Arts in Radio Arts and immediately went to work for WAPX Radio Station in Montgomery, Alabama.
After working at the radio station for 4 years, Crawford went to work for the newly founded local television station, where his career was quickly catapulted into the public eye; the Civil Rights movement in Montgomery was taking off, and Crawford interviewed Martin Luther King, Jr. during the bus boycotts, thus beginning his 31-year career with Gaylord Broadcasting. As his career moved the Rice family to Tampa, Dallas-Fort Worth, Houston, Seattle-Tacoma, and Denver, Crawford advanced from reporter, anchorman, and news director to general manager, director-vice president, and eventually Executive Vice President of Gaylord Broadcasting. From 1955 to 1977, Crawford and Lydia were also raising their three daughters, Anne, Cathryn, and Susan. He also served as President of the International Rotary during the early 1970’s, an organization that allowed Crawford and Lydia to travel to Australia, Japan, and Hong Kong. Crawford and Lydia retired in the mid-1980’s and lived in Washington State and Texas. They took up downhill skiing, joined a hiking group, and became active supporters of their three daughters and sons-in-law who were busy raising children.

Crawford was a loving and dedicated husband; he promised Lydia he would outlive her so she would never be alone, a commitment he was able to honor by 6 weeks. He was also a beloved and admired father and grandfather (“Grandaddy”). Crawford had an uncanny ability to captivate an audience with his story telling, sharing both rich life experiences and wise advice. He was known among friends and family for his sense of humor, generosity, and brilliance. Well into his senior years, Crawford remained an avid reader, consumer of the news and current events, and die-hard Alabama Crimson Tide football fan.

To leave messages of condolence for the family, please visit www.ASacredChoice.com.
Read Less

To send flowers to the family or plant a tree in memory of Crawford Phillips Rice, please visit our Heartfelt Sympathies Store.

Receive notifications about information and event scheduling for Crawford

There are no events scheduled. You can still show your support by sending flowers directly to the family, or planting a memorial tree in memory of Crawford Phillips Rice.
Visit the Heartfelt Sympathies Store

We encourage you to share your most beloved memories of Crawford here, so that the family and other loved ones can always see it. You can upload cherished photographs, or share your favorite stories, and can even comment on those shared by others.

5 trees were planted in the memory of Crawford Rice

Posted Aug 24, 2020 at 05:02pm
To the three surviving daughters of Crawford Rice—
I am a retired partner of Andrews Kurth, a large Houston Law Firm.
In the 1960’s I was summoned by Mr. Kurth, the head of the firm, and informed that one of his very good friends, Mr. E.K. Gaylord, was coming to Houston to set up what became known as Channel 39, and that I was to see that everything went well with that venture. Mr. Gaylord was 96 years old at the time, but quite lively. He wad a son who was 67 and when I talked to them separately on the phone, it sounded like their ages had been switched.
The man Mr. Gaylord sent to Houston to guide the proceedings was your father, Crawford Rice. He could not have sent a better man. He was very wise and knowledgeable, not only in broadcasting, but also seemingly in everything. He and Mr. Gaylord very wisely decided not to put the station in Sharpstown as originally planned, but at an alternate site in Southwest Houston.
My deepest sympathies upon Crowford’s passing—He was just a lovely person in every respect.
Sincerely,
Robert S. Weatherall
P.S. I didn’t know about his Alabama heritage until I saw the obit. We were kindred spirits in more ways that I knew. We were the same age, born in 1928, and of similar heritage. I was born in Birmingham, Alabama. 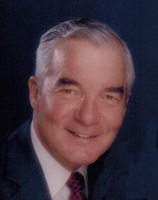