To share your memory on the wall of Daniel Yeary, sign in using one of the following options:

Following graduation from Southwestern Theological Seminary in Fort Worth, Texas, Dan began leading student work for the Kentucky Baptist Convention. After two years, Dan was called to begin leading the college ministry at First Baptist in Lubbock. Under his leadership, the ministry grew so large they, by necessity, initiated one of the first student led worship services in the country. Over 1,000 students attended each Sunday. From Lubbock, Dan and Melinda moved to South Main Baptist Church, Houston where he served as Associate Pastor, and developed the first ministry to single adults among Baptist churches in the country.

Dan and Melinda were then called to the University Baptist Church in Coral Gables, Florida where Dan served as Senior Pastor. Under his dynamic leadership, UBC grew to exceed 2,000 attenders on a Sunday. After 18 years in Florida, Dan and Melinda, continuing to follow God’s call, then moved to Arizona where for two decades he served as pastor of the North Phoenix Baptist Church, one of the largest churches in America.

Facing the challenge of leading the church and being primary caregiver to Melinda, Dan stepped down from his pastorate at North Phoenix. They then moved to Waco, Texas in 2013 where he was given the opportunity to served as interim pastor of First Baptist Church, Woodway and adjunct professor at Baylor’s George W. Truett Theological Seminary. Following Melinda’s death in 2016, Dan moved to Houston in 2017 to be closer to his children and grandchildren.

Dan was preceded in death by his beloved wife of 55 years, Melinda, and his brother, Ron (Speedy) Yeary. He is survived by three children, their spouses, and 10 grandchildren: Wes and Erica Yeary — Braden, Caden, and Aubrey Black, and Karis Yeary; Steve and Missy (Yeary) Wells — Rachel (Wells) and Blake Lawrence, Ben and Joshua Wells; Doak and Amy Yeary — Sky, Colt, and River. Dan was greatly looking forward to the birth of his first great grandchild, Fischer Samuel Lawrence, at the end of this month. Dan is also survived by countless parishioners and ministers who counted him their pastor and who discovered God’s love in Dan’s love.

To send flowers to the family or plant a tree in memory of Daniel John Yeary, please visit our Heartfelt Sympathies Store.

Receive notifications about information and event scheduling for Daniel

We encourage you to share your most beloved memories of Daniel here, so that the family and other loved ones can always see it. You can upload cherished photographs, or share your favorite stories, and can even comment on those shared by others.

Posted Jan 08, 2020 at 12:40pm
Oh, my, goodness! As pastor at University Baptist Church, Coral Gables, Dan spoke into my life in many ways. He was always a mentor, friend, pastor and role model. Yes, even to us single women because he reflected God's love in all he did. His sermon's left me in tears almost every Sunday because the Holy Spirit was using Dan's words to encourage, challenge, exhort, and teach me. It was always as if he was talking to me and no one else. All who knew Dan were affected by him and his consistent expression of the love of Jesus to each person. We will miss him here on earth for sure, but heaven is rejoicing in the home going of this humble servant. Well done, Dan! See you soon.
Comment Share
Share via:
RM

Posted Jan 06, 2020 at 08:57pm
Dan spoke in a series of chapel services at SWBTS while I was a student. Over the course of those few days nearly 40 years ago I vividly remember thinking , “That’s the kind of preacher I’d love to be someday.” He became a template for so many of us to follow, and later became a beloved mentor. His support and encouragement of me, and my writing of In Other Words, are cherished treasures of his legacy. I recently purchased a small placard at Hobby Lobby that is a fitting tribute to Dan. It has a picture of a dog bone with these words: Live Like Someone Left The Gate Open. Dan truly lived like the gate was wide open. His life and influence leave me with a smile. Raymond McHenry
Comment Share
Share via:
A

Posted Jan 06, 2020 at 12:02am
Pastor Dan was one of the kindest men I’ve had the pleasure of knowing. God bless and keep his family during this season of loss.
Regards, Carolyn CLARK
Scottsdale Az
Comment Share
Share via:
BW

Posted Jan 05, 2020 at 09:11pm
I thank God for allowing me to have Dan as my pastor while I was in junior high and high school in Coral Gables, Florida. He always reminded us that Christianity is not about a religion, but a personal relationship with Jesus Christ. In the Sunday evening Integrity Evangelism class for youth and adults, he asked us to read John 4 every day for a week, and write down what we learned about how Jesus did evangelism. I still remember a lot of what God showed me for six or seven days, although I did not understand how I would learn anymore after I wrote down so much the first day. I appreciate the fact that Dan was always at youth camp with us, and modeled a happy Christian life with lots of laughter and fun. He was a great storyteller, and seemed to always have sermons that could reach seekers and build up long time believers at the same time. One thing he taught us at youth camp was: “God is. I am. With Him, I can.“ As he preached, he tossed into the audience frisbees with those phrases written on them. The rest of the week, we would sometimes get those frisbees while playing Frisbee Golf. Maybe we will play with them someday in heaven. I hope we will all remember Dan with joy, and with gratefulness to God for allowing us to know such a fine man.
Comment Share
Share via: 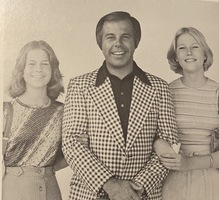