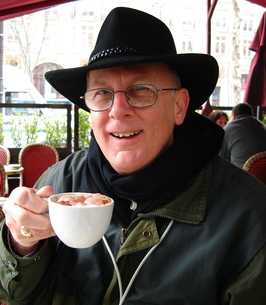 Memorial Candles Lit for Jack | SEE ALL
Light a Candle
"We are honored to provide this Book of Memories to the family."
— A Sacred Choice
Funeral Details Memory Wall Photos & Videos Send Flowers

Print
Jack Marvin Crook, 73, of Jersey Village passed away on October 1, 2018, after a long, courageous battle with cancer. He was born on November 28, 1944, in Langley Field, Virginia, to Erwin T. and Anna Catherine Crook.
Jack grew up in Florida where he attended Coral Gables High School. Jack graduated Texas A&M University where he was a member of Squadron One, Corps of Cadets, Class of ’67. He received his BA in History and later earned his MA in Medieval History at Texas Christian University in 1970.
After a career in both social work and technology, Jack found his true calling when he began teaching World History, Humanitas, Economics, and Government at Cypress Creek High School. A modern Renaissance Man, he also taught what he loved so much -- the humanities.
True adventurers, Jack and Barbara loved exploring Europe, but of all the places they traveled, Paris was his favorite. This photo shows a content Jack sipping a cup of hot chocolate at Confiserie Angelina.
He is survived by his wife Barbara and family members: Timmothy Crook; Matthew and Patty Hart; Matthew and Melissa Young; Matthew Moore; and their children: Claire and Gabriel Crook; Marshall and Delaney Hart; Michael and wife Hannah Young, and Mackenzie Young; Sarah, James, Margaret Anne, and John Moore. Pawpaw will be greatly missed.
He was preceded in death by his parents and his beloved Kellie Young Moore.
Jack’s funeral will be held at Christ Church Episcopal Cathedral, 1117 Texas St., Houston, TX 77002, on Oct. 13, 2018, at 11:00 A.M. followed by a reception at the church. The Cathedral Parking Garage on San Jacinto between Texas and Prairie provides free parking.
In lieu of flowers, the family suggests donations to the Cypress-Fairbanks Endowed Scholarship Fund (www.thecfef.org) in Jack’s name.

To send flowers to the family of Jack Crook, please visit our Heartfelt Sympathies Store.

We encourage you to share any memorable photos or stories about Jack. All tributes placed on and purchased through this memorial website will remain on in perpetuity for future generations.

Provide comfort for the family of Jack Crook by sending flowers.
Send Flowers

DH
Barbara,
I am so sorry for your loss of your beloved Jack. It is few people these days that have strong, beautiful, long term partners in life. I remember any time you spoke of him, there was a smile on your face, and love in your voice. May God be with you and your family.

Thank you for sharing!

Provide comfort for the family by sending flowers.

Or use your email:

Provide comfort for the family by sending flowers.

Connect with families at their time of loss. By subscribing to email updates, you will receive two daily updates containing all new stories, photos, candle lightings, condolences, and more.