To share your memory on the wall of Joan Naschke, sign in using one of the following options:

Joan was raised in Houston where she attended school at Incarnate Word Academy and maintained lifelong friendships with the Religious Sisters. She attended Rice University for a year before her marriage to Adolph on December 20, 1947. Joan and Adolph were founding members of Corpus Christi Catholic Church.

Joan centered her life on the presence of Christ in the Eucharist as lived and modeled by the Congregation of the Blessed Sacrament. As an Associate, Joan committed herself to be a disciple and apostle of the Eucharist. Joan was a daily communicant and faithfully prayed Morning Prayers before Mass. As a fruit of her worship and prayer life Joan was involved in many ministries over the years; Adult Faith Formation, Eucharistic Minister, Women’s Club, Altar Linen Care and visiting the home bound and bringing them communion.

Joan’s last and longest career was with the USPS where she rose to the position of EEOC counselor. She was also the temporary postmaster of Brenham, TX for a short time.

Joan was the matriarch of a large and loving family. She instilled wonderful values and love of life to her children and grandchildren and great grandchildren. She taught us to be frugal, stay humble and always follow the Golden Rule.

Joan and Adolph purchased 40 acres of land near Giddings, TX and built a cabin by themselves and the help of their children. She enjoyed the country. She also loved to travel and took many trips and cruises all over the world including South America, Alaska, the Amazon, Europe and a trip to the Holy Land.

Joan’s biggest joy was the annual trip to Galveston Island where the family would rent a beach house on the beach. She loved the water and would enjoy riding the waves on her innertube. If anyone was lucky enough to catch some keepers, Joan was ready to fry them up in her cast iron skillet. The highlight of the day would be the games the family played on the porch. Joan loved to play bridge, Texas Hold em, Trivial Pursuit or any game you wanted to play.

Joan was an excellent cook and baker. Her hamburgers, chicken fried steak, beef stroganoff, shrimp creole, mesquite smoked chicken and turkey soup were legendary. She also loved to bake, especially for the holidays. Everyone would anxiously await the goody bag they would get on Christmas Eve. Her biscotti and cookies were prized possessions as well as her homemade eggnog served with Blue Bell vanilla ice cream and a dash of nutmeg.

Joan was a huge Astros fan since their inception and even attended game when they were the Colt 45’s at Colt Stadium. She an Adolph had mini season tickets for many years. She made all 7 of her children baseball fans.

A Rosary will be recited at 7:00pm, on Tuesday, August 18th, with a visitation to follow until 9:00pm, at Corpus Christi Catholic Church, 9900 Stella Link Rd., Houston, TX 77025. The Mass of Christian Burial will be celebrated at 10:00 am, on Wednesday, August 19th, also at Corpus Christi Catholic Church. Following the Mass, the family with gather for a private Rite of Committal at Houston National Cemetery.

In lieu of flowers, donation may be made to Corpus Christi Catholic Church, 9900 Stella Link Rd., Houston, Texas 77025.

Receive notifications about information and event scheduling for Joan

Donations are being accepted for: Corpus Christi Catholic Church .

We encourage you to share your most beloved memories of Joan here, so that the family and other loved ones can always see it. You can upload cherished photographs, or share your favorite stories, and can even comment on those shared by others.

Posted Aug 12, 2020 at 07:40pm
I was very much saddened to hear of Joan's passing. Prayers for strength and comfort for the Naschke family.
-Amy Houghton Fagan
Comment Share
Share via:
PV

We will always treasure this sweet lady and her dear family who took us in and loved us thru a difficult time in our lives. From that day until our last visit with her about 10 days ago, she continued to open her heart to us and make us feel like we had family here in Houston. She is surely one of God’s special angels. David & Clara Dudak 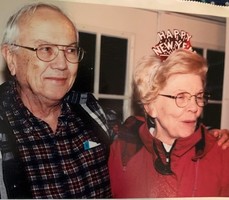 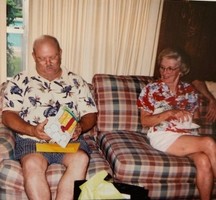 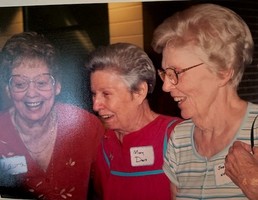