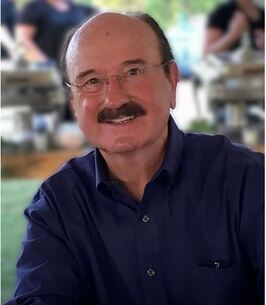 John H. “Buzz” Brooks, Jr., 72, passed into Heavenly peace on Sunday, October 9, 2022, in Pearland,
Texas. The youngest of six children, and the only boy, Buzz was born in Palestine, Texas on September
3, 1950, to Martha Geraldine Fowler “Gerry” Brooks and John H. Brooks.

On May 24, 1986, Buzz married the love of his life, Karen Elizabeth Babin Brooks, in Bay City, Texas.
During their nearly 29 years of marriage, they enjoyed riding motorcycles, traveling, scuba diving, and
spending time with family and friends.

Buzz spent over 40 years working in the oil & gas industry. He began his career as a pipefitter/piping
designer, welder (at one point owning his own welding business in East Texas), and maintenance
manager. He later held positions as a purchasing agent, planner/scheduler, cost engineer, controls
manager, turnaround coordinator, and project manager in refineries and chemical plants around the
world. He even helped build the Superdome in New Orleans.

Buzz’s greatest joy in life was serving his Lord and Savior, Jesus Christ. He and his wife, Karen, both
ordained ministers, served as volunteer youth pastors of the “Power Force” youth group at Sugar Valley
Church in Old Ocean, Texas during the late 1980s through mid-1990s. They also served the homeless in
Houston and Galveston for more than 20 years, eventually formalizing their service activities in “Go Now
Ministries” which ministered to, and served, not only the homeless, but also the motorcycle, and
drug/alcohol rehabilitation communities in the greater Houston area.

In his retirement, Buzz continued serving the homeless and used his extensive work experience and
artistic talents to serve his church family at LS Church in Alvin, Texas.

Buzz made friends everywhere he went and will be remembered as someone who could design, build, or
fix just about anything and was always willing to lend a helping hand.