To share your memory on the wall of Larry Knapp, sign in using one of the following options:

Larry was born in Los Angeles and grew up in Buena Park (Orange County), California. From early childhood on, Larry was fascinated with nature – a... Read More
Larry Allan Knapp, Artist, Friend and Partner passed peacefully May 31, 2019 in Houston.

Larry was born in Los Angeles and grew up in Buena Park (Orange County), California. From early childhood on, Larry was fascinated with nature – animals, the sea, flowers, everything related to the outdoors.

After graduating from Buena Park High School, Larry enrolled at California State University at Fullerton, where he turned his talents to the world of creativity. Despite his dyslexia, Larry graduated with high marks and a degree in Fine Arts. He majored in painting and graphic design, both talents in which he excelled and made his life calling.

He was hired at Baker Oil Tools in Los Angeles as a graphic designer. Soon after, he was offered a management position in the Houston office of Baker. When Larry investigated and found he could buy a home in Houston for a fraction of the cost of a home in LA, he was hooked. He moved to Houston, bought a home and established a successful career. A few years after his move, he was recruited by Gulf Printing Company to be their art director. He loved his work at Gulf and was there until the company was sold. Larry then opened his own graphic design business, at the same time setting up his painting studio to realize his true passion.

Although Larry lived in Texas for over half his life, he always considered himself a Californian, with his true goal being to return to his native state. He was prepared to make the return when he met the man who was to become his life partner. After their meeting at a Galveston Mardi Gras celebration, Larry and Jerry became constant companions – postponing for over 20 years Larry’s plans to return to California. Over the course of their 28 years together, Larry and Jerry traveled throughout the US, Mexico, Canada and Europe. A number of Caribbean cruises shared with Jerry’s family were also highlights of their travel adventures.

Painting became an obsession for Larry. In his Houston studio he created over three dozen stunning nature studies, highlighting birds, various mammals, fish and pets. His commissioned pet paintings were unique and extremely sought after.

Larry was also an accomplished wind-surfer. His passion for this sport took him everywhere from the Texas Gulf Coast to California to Hawaii. The water meant everything to Larry, and it figured prominently in his travel destinations as well as his art. More than half of his paintings include the sea or the ocean.

Larry Knapp was also a remarkable “come-back kid”. He triumphed over life-threatening health issues multiple times, conquering Hodgkins lymphoma, heart by-pass surgery, prostate cancer and several cardiac interventions. He tried his damnedest to beat his most recent brush with heart issues, but on the morning of May 31, they took their tragic toll.
Larry will always be remembered by friends and acquaintances alike as a happy, caring and gentle soul who was never without his signature smile.

Larry’s art may be viewed at his web site: www.larryknapp.art.

A heartfelt debt of gratitude is owed to the two amazing doctors who kept Larry with us for many years. If it were not for Dr. Julie Nguyen and Dr. Seema Shah, Larry would not have had the “nine lives” that kept bringing him back to us after each of his many health episodes.

A celebration of life will be held on Saturday the 8th of June at noon at A Sacred Choice Funeral Home, 4740 Dacoma Street, Suite A, in Houston, with a reception to follow.

In lieu of flowers, the family suggests memorials to one of the following organizations or to a charity of your choice.

Receive notifications about information and event scheduling for Larry

We encourage you to share your most beloved memories of Larry here, so that the family and other loved ones can always see it. You can upload cherished photographs, or share your favorite stories, and can even comment on those shared by others.

Posted Jun 19, 2019 at 09:50am
Jenny T. I am so sorry and heartbroken to hear this news. We will always remember the drinks and laughs in Port A with you both. Lots of love and hugs to you.
Comment Share
Share via:
AC

Posted Jun 19, 2019 at 09:48am
Jerry, I am so sorry for your loss. Larry was such a kind soul. I loved being your neighbor for all of those years in the Heights. We did have fun. Thinking of you and your family. x rebecca

Posted Jun 19, 2019 at 09:47am
Jason B.
Jerry — Wendy and I are so sorry to hear this news. We pray for your strength, courage and peace during this extremely difficult time. We love you.
Comment Share
Share via: 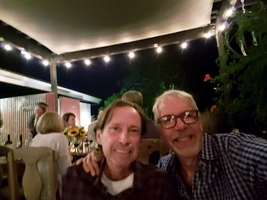 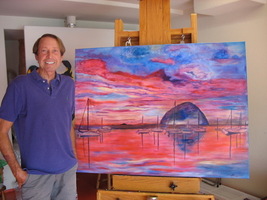 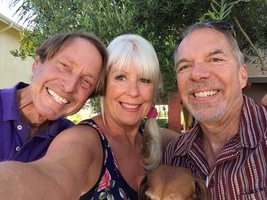