To share your memory on the wall of Larry Thornberry, sign in using one of the following options:

Print
Larry Ray Thornberry was born on April 18, 1951 in Dallas, Texas to Austin Clifford Thornberry and Marian Elizabeth Ray. He passed away on October 8, 2019 in Houston, Texas.

Larry grew up in Dallas, Texas and attended City Park elementa... Read More
Larry Ray Thornberry was born on April 18, 1951 in Dallas, Texas to Austin Clifford Thornberry and Marian Elizabeth Ray. He passed away on October 8, 2019 in Houston, Texas.

Larry grew up in Dallas, Texas and attended City Park elementary and Crozier Tech High School. He joined the Air Force in June 1970 and served for four years.

Larry worked for Desoto Chemical company, in Garland, Texas, for many years until he took a position at KMCO Chemical, in Crosby, Texas and relocated to the Houston area in 1991. He worked for KMCO until he retired in 2017.

Larry had a huge heart and helped so many people over the years. The world was a better place while he was in it and he will be greatly missed by those whose lives he touched.

Larry’s memorial service will be on Friday, November 1, 2019 at A Scared Choice at 11:30 am in Houston, Texas followed by internment at Houston National Cemetery in Houston Texas.
Read Less

To send flowers to the family or plant a tree in memory of Larry Ray Thornberry, please visit our Heartfelt Sympathies Store.

Receive notifications about information and event scheduling for Larry

We encourage you to share your most beloved memories of Larry here, so that the family and other loved ones can always see it. You can upload cherished photographs, or share your favorite stories, and can even comment on those shared by others.

Love, Sarah and Matt Jewell (and Raymond, Ross an, All my love Sherrie and family, and other have sent flowers to the family of Larry Ray Thornberry.
Show you care by sending flowers

Love, Sarah and Matt Jewell (and Raymond, Ross an

Posted Oct 31, 2019 at 05:55pm
Uncle Larry will be so very missed. I have fond memories of growing up with him. Our deepest condolences and much love. We wish we could be there!

Love, Sarah and Matt Jewell (and Raymond, Ross an purchased flowers for the family of Larry Thornberry. Send Flowers

All my love Sherrie and family

All my love Sherrie and family purchased flowers for the family of Larry Thornberry. Send Flowers

Posted Oct 21, 2019 at 12:06pm
On Larry's sister Sherri's birthday we went to get pizza and had chocolate cake afterward. We had a nice time. Larry was always good to me. We all went to Turner Falls. Me and his sister, Sherri, spent the night at Larry's house. We played darts and his dog Barlow paid his respects during the night. I will miss Larry but I know I will see him again. With much love to my cousin. Tell everyone we'll be coming along directly. 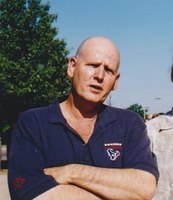