To share your memory on the wall of Leonard LaNoue, sign in using one of the following options:

Provide comfort for the family of Leonard LaNoue with a meaningful gesture of sympathy.

Print
Leonard F. LaNoue, of Houston, passed away surrounded by the love of his daughter and son-in-law on Saturday, the 28th of March 2020, after a valiant fight against prostate cancer. He was 94 years of age.

Leonard grew up in Kankakee, Ill... Read More
Leonard F. LaNoue, of Houston, passed away surrounded by the love of his daughter and son-in-law on Saturday, the 28th of March 2020, after a valiant fight against prostate cancer. He was 94 years of age.

Leonard grew up in Kankakee, Illinois, and its surrounding towns. He was baptized at birth into the Catholic church. His faith was always an important part of his life. One of his earliest memories was of his parents kneeling beside their bed each night saying their prayers.

Leonard’s father served in France until the end of World War I. Upon his return, he married, started his family, and built a good business selling life insurance. But when Leonard was three years old, the Great Depression hit. Leonard often told of how, as the economy plummeted, his father personally paid his customers’ premiums so they would not lose their policies. His father’s selfless generosity was deeply bound into Leonard’s worldview.

Ultimately, his father lost everything. Leonard and his three sisters, Lorraine, Marjorie, and Marie, lived in ever-increasing poverty with their parents. Leonard told of one particularly brutal winter when he and his sisters walked along the railroad tracks picking up small bits of coal fallen from the train. Sometimes that winter an uncle would bring them bare corn cobs for fuel. The heat would last about twenty minutes, long enough to get into bed and fall asleep. Even with no running water and dirt floors in their shanty house, he still saw his childhood as happy.

Leonard always worked to help his family survive and his job in his teens as a machinist in a shop making airplane parts for the war served him well throughout his life. As a one of America’s Greatest Generation, Leonard fought for his country during World War II in the Pacific Front as a member of the U.S. 58th Naval Construction Battalion, ending the war as a Machinist’s Mate Second Class (T) (CB) USNR. On Easter Sunday, April 1, 1945, the 58th Battalion of the Seabees participated in the attack off the coast of Okinawa with the largest sea force ever to sail the seas. After the historic battle, the 58th went ashore with the Marines to rebuild Yontan Airfield.

After the war, Leonard met his first wife, Veronica, in Kankakee. They married and together they raised Veronica’s daughter, Sheila, and had two children of their own, Michele and Marc. Both Veronica and his son predeceased him.

Leonard’s incredible charm, intelligence, strong work ethic, discipline and frugal perspective drove him to early financial success. Joining the DoAll Company as a salesman, he quickly rose through the ranks, ultimately holding the position of President of DoAll Manufacturing in Minneapolis. While working full time, Leonard received his MBA from the University of Chicago in 1970.

After retiring at 65 and moving permanently to Houston, he started Metal Cutting Specialists and Abrasive Water Jets which cut steel and superalloys for manufacturers across the United States. He continued to dominate the field until he was 89 when he sold the businesses.

Leonard met and married his wife Paulina as he grew his companies, working together with his son, Marc. He and Paulina had a full and exciting life living between Houston and Santiago, Chile, her hometown. Together, they traveled around the world exploring diverse cultures and people, enjoying dancing, food, and wine. She predeceased him after twenty years of marriage.

After he sold his companies, Leonard turned his indefatigable energies towards helping his daughter and son-in-law add manufacturing to their business: locating the site, hiring the team, finding the equipment and overseeing operations whenever he wasn’t on one of his travel adventures, cruising the seas.

In his early 90’s, Leonard had his knees replaced so that he could continue to travel and dance rock-n-roll. He stood to deliver the eulogies for all three of his sisters over the last years, moving many of the relatives and friends to tears with his recollections of the difficult childhoods they endured and the wondrous lives they built for themselves and their children.

Leonard was until the very end a positive force in the lives of his many friends and family. He seemed indestructible. He taught us all to always see the best in people, be generous with whatever we have, do our very best, work hard and, as he put it at the age of 94, “enjoy life because sometimes it’s shorter than you think.”

He is survived by his daughter, Michele of Houston; son-in-law Gerald; granddaughter, Nathalie; brother-in-law Ernie of Phoenix, Arizona; and stepdaughter Sheila of Rockford, Illinois; as well as his many nieces, nephews, grand- nieces, grand-nephews, great grand-nieces and great grand-nephews who he truly loved and cherished. He will be deeply missed by all.

A memorial service has been delayed due to the Covid-19 Pandemic and will be announced as soon as safety allows. The family wishes to thank Sacred Choice for their emotional support and the many ways they helped during the final days of Leonard’s life. In lieu of flowers, with gratitude for the wonderful doctors, nurses and aids who gave him so many years to enjoy, Leonard requested that memorial contributions be made to MD Anderson Cancer Center, Fundraise to End Cancer, P.O. Box 4470, Houston, TX 77210-4470; or by phone at 713-792-0071; or MDAnderson.org/fund- raise.
Read Less

To send flowers to the family or plant a tree in memory of Leonard Francis LaNoue, please visit our Heartfelt Sympathies Store.

Receive notifications about information and event scheduling for Leonard

There are no events scheduled. You can still show your support by sending flowers directly to the family, or planting a memorial tree in memory of Leonard Francis LaNoue.
Visit the Heartfelt Sympathies Store

We encourage you to share your most beloved memories of Leonard here, so that the family and other loved ones can always see it. You can upload cherished photographs, or share your favorite stories, and can even comment on those shared by others. 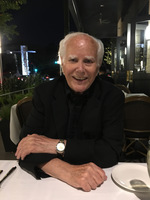