To share your memory on the wall of The Rev. Andrew David Parker, sign in using one of the following options:

Provide comfort for the family by sending flowers or planting a tree in memory of The Rev. Andrew David Parker

Provide comfort for the family by sending flowers or planting a tree in memory of The Rev. Andrew David Parker

Print
The Reverend Andrew David Parker brought peace and light to everyone he met. On December 18, 2018, he passed into the nearer presence of our Lord, leaving behind a legacy of joy, gentleness, and deep love.

Andy was born on June 28, 1957 ... Read More
The Reverend Andrew David Parker brought peace and light to everyone he met. On December 18, 2018, he passed into the nearer presence of our Lord, leaving behind a legacy of joy, gentleness, and deep love.

Andy was born on June 28, 1957 in Bartlesville, Oklahoma to Harry and Phyllis Spidy Parker. He grew up there with his brother, Kevin, and in 1969 the family moved to Lubbock, Texas. After receiving his Bachelor’s from Texas Tech in 1978 and a Master of Horticulture from Texas A&M in 1983, Andy discerned a call to ministry in the Episcopal church. He was ordained to the priesthood on December 11, 1989.

It was while preparing for ordination at the Berkeley Divinity School at Yale that Andy met Elizabeth Welch, whom he promptly asked to marry him. For thirty-one years, Liz and Andy walked together, beginning their ministry in 1989 at the Episcopal Church of the Heavenly Rest in Abilene, Texas. While there, they celebrated the birth of their sons Will in 1989 and Ben in 1992. In 1993, they moved to Amarillo to serve at St. Andrew’s Episcopal Church, and in 1994 their youngest son Caleb was born. The encouraging, conscientious man others knew as a priest and friend was this and more as a husband and father. He is a hero to all his sons.

In 2001, Andy was called to serve as Rector of St. Timothy’s Episcopal Church in Lake Jackson. There, as part of a rich ministry, Andy and Liz cultivated creativity as a pathway for spiritual growth. Andy used poetry and contemplative devotion to take him deeper into the mystery of God, and he showed this path to many others. Andy had a creative spirit and was the author of many poems, songs, and sermons. He also wrote "Keeping the Promise: A Mentoring Program for Confirmation in the Episcopal Church" and introduced the catechumenate in every church he served.

In 2016, Andy was called to Emmanuel Episcopal Church in Houston, where he led the congregation through the loss of their building to Hurricane Harvey and continued to serve until the cancer in his body would no longer let him.
Andy was a man of gentleness and strength, of intense personal discipline, with a passion for forming disciples; he was a brilliant thinker and insightful poet; he was boldly goofy and free of cynicism; he had a deep love of creation, of cooking and jazz and tea and cycling. He will be achingly missed by those who survive him: father Harry; wife Liz; sons Will, Caleb, Ben and daughter-in-law Qingzi Cai; granddaughter Cordelia; brother Kevin and sister-in-law Renée; niece Amy; nephew James; and so many dear friends.

Andy's funeral will be held at Palmer Memorial Episcopal Church, 6221 Main St. in Houston, on December 29, at 11:00 AM. Donations in memory of Andy can be made to the Emmanuel Episcopal Church Rebuilding Fund, 16000 Barkers Point Lane #175, Houston, TX 77079. To give online, visit www.emmanuel-houston.org/stewardship and click “Give Online.”
Read Less

To send flowers to the family or plant a tree in memory of The Rev. Andrew David Parker, please visit our Heartfelt Sympathies Store.

Receive notifications about information and event scheduling for The Rev. Andrew David Parker

Donations are being accepted for: The Emmanuel Episcopal Church Rebuilding Fund.

We encourage you to share your most beloved memories of The Rev. Andrew David Parker here, so that the family and other loved ones can always see it. You can upload cherished photographs, or share your favorite stories, and can even comment on those shared by others.

Mary L Welch sent flowers to the family of The Rev. Andrew David Parker.
Show you care by sending flowers

Posted Dec 30, 2018 at 12:03pm
Yesterday, December 29th, A Sacred Choice was honored to be a small part of the funeral service for The Rev. Andrew David Parker, Episcopal priest. The service was held at the beautiful Palmer Memorial Episcopal Church, where Andy's wife Liz serves as a priest. Approximately 600 persons attended the service, which was standing room only. There were three choirs and the music was glorious. Many priests showed their love and respect for Andy and Liz by attending and being seated together. The Rt. Rev. Andrew Doyle preached a meaningful and comforting homily and Fr. Neil Willard, Rector, was chief celebrant. It was a wonderful service that glorified God and celebrated the life of a devoted husband, father and grandfather, as well as a priest of the church. Everyone connected with the service, especially those at Palmer Memorial worked very hard to offer a magnificent service of thanksgiving for the life of Rev. Andy Parker.

Thank you to The Rev. Elizabeth Parker and her lovely family for allowing us to serve them. It was a blessing to us. May they receive the peace that passes all understanding.

Also, our thanks go to those at Palmer who where so welcoming and kind. We appreciated the opportunity to serve them as well.

Posted Dec 26, 2018 at 10:20am
With love and wonderful memories from Mary and Ernest, Jim and Bonnie and the Sean Welch Family 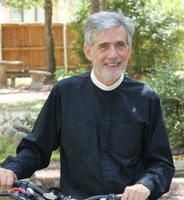 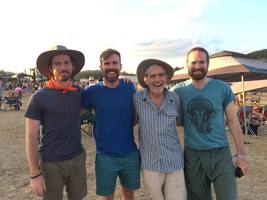 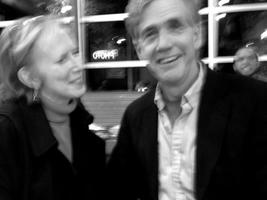 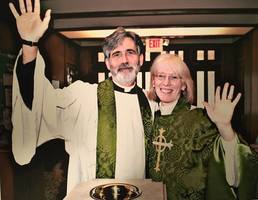