To share your memory on the wall of David Miears, sign in using one of the following options:

In 2013, David started Backwater Fence. His drive and competitive nature, coupled with his motto, “The first thing we build is the relationship,” quickly built Backwater Fence into one of the largest, most successful commercial fence companies in the industry. David was respected by all who knew him. He was actively involved in the American Fence Association and served on the Board of Directors of the Texas Fence Association.

Most knew David as an avid hunter and fisherman. He served on the executive committee of Houston Delta Waterfowl Association and as president in 2017 and 2018 grew the chapter to #1 in Texas and #4 in the country.  One of his passions as president was to host an annual Veteran’s “Heroes’ Hunt”, where a group of veterans are invited to duck hunt.  Many were disabled, but no matter what, David made it accessible and comfortable for all, giving them the full 5 Star treatment. He also loved mentoring anyone who wanted to get outdoors and duck hunt. He organized youth hunts where kids, with their parents, could experience for the first time what he was so passionate about.

In June of 2020, David married his 8th grade sweetheart, Mary Alice Jageman Quinlan of Houston, TX. Longing for it his whole life, he was a devoted and loving father to his new step-sons, Tucker, Boyd and Jacob. They adored him. Everyone who knew David knew that if you were “his people”, he always had your back. He had the biggest heart of anyone, was fiercely loyal, and all who knew him loved him.

David was preceded in death by his mother Rosemary Toney Miears. He is survived by his devoted wife Mary, his step-sons John Tucker Quinlan, James Boyd Quinlan and Jacob Henry Quinlan and his beloved hunting buddies Meeha and Cooper. He also leaves his father Robert Arthur Miears of Houston, TX, and brother Todd Douglas and wife Stacey Lynn Miears of Houston, TX.

A Celebration of Life will be held for all who knew and loved David at a later date.

In lieu of usual remembrances, the family asks that memorial contributions, in David's name, be made to Houston Delta Waterfowl Association, https://deltawaterfowl.org/houston-chapter-houston-tx/.
Read Less

To send flowers to the family or plant a tree in memory of David Andrew Miears, please visit our Heartfelt Sympathies Store.

Receive notifications about information and event scheduling for David

There are no events scheduled. You can still show your support by sending flowers directly to the family, or planting a memorial tree in memory of David Andrew Miears.
Visit the Heartfelt Sympathies Store

We encourage you to share your most beloved memories of David here, so that the family and other loved ones can always see it. You can upload cherished photographs, or share your favorite stories, and can even comment on those shared by others.

Posted Jul 29, 2020 at 10:20am
The St. Thomas High School family is deeply saddened by your loss. Please know that Mr. Miears and your family will be in our prayers.

Flowers were purchased and a memorial tree planted for the family of David Miears. Send Flowers

Posted Jul 21, 2020 at 09:56am
I remember the Miears family, who lived next door growing up. They were very nice, good people with two young boys, younger than me. David, the older, was handsome even as a kid! I am so sad to learn of his too early death, and that of his mother, Rosemary. They are home now, in the glory of The Lord. I wish for David's family and friends, comfort and peace at this unspeakably difficult time. With heartfelt and sincere blessings, Stephen Paine.
Comment Share
Share via:
D

Posted Jul 19, 2020 at 05:33pm
Sending our thoughts and prayers to all of David’s family and many friends. We met David through our daughter, Reneé’, when she worked w/him @ Taste of Texas. We are extremely appreciative of his support and friendship to her for 25 years. He is and will continue to be missed. His memory will always be with us.
Comment Share
Share via:
GM

Posted Jul 19, 2020 at 02:12pm
So saddened to hear of the passing of David. He was a wonderful and thoughtful guy who I’ve had the privilege of knowing since the ‘80s. I have great memories of hunting, fishing and just hanging out with him (and Bob and Doug) as he grew up through his teens and college years. My deepest condolences to his family.
Greg & Sandy Moredock
Johnson City, Texas

Posted Jul 18, 2020 at 01:58pm
My prayers and thoughts go out to David’s family! David was a great guy and fraternity brother at Tech! Great guy who we all admired a lot!
Comment Share
Share via: 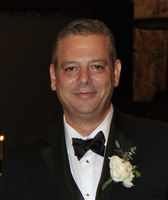